Eva Conti is a professional, touring musician who has traveled globally for her work– from Palm Beach, to Tel Aviv. She is proficient in a variety of instruments such as guitar and piano, but her primary instrument is the French Horn, in which she has a Masters degree from the Manhattan School of Music.

Ms. Conti is not only an gifted musician, but an incredible Flamenco dancer. Her ability as a dancer is another talent that has taken her across the world. When travelling more locally, she choreographs some of her own work and performs with the Atlantic Classical Orchestra. 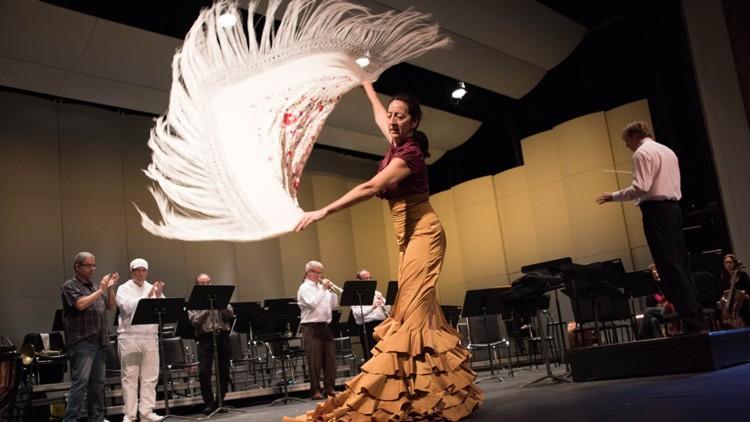 Interviewology: Describe your evolution from music lover to performer.

Eva Conti: Music was in the family. My mother was an amateur classical pianist and was always playing Chopin. My dad was a jazz bebop musician and performed with the big bands by the age of 16. In Korea during the war, he played a bit then came back to play the sax. He was disillusioned with some of his colleagues and chose another profession, then moved to Paterson, New Jersey. I grew up in Old Tappan. Our house was always loaded with musicians, even late at night. I grew up in that musical atmosphere, and was taught to play percussion and flute at a young age. I followed my older sister’s piano lessons and her trajectory into music. In high school, I picked up guitar, playing mostly Joni Mitchell. I started playing and singing in coffee houses in college at the University of Rhode Island, where I earned degrees in biology and classical guitar.

I was introduced to the French Horn in college and began playing it regularly. After completing college, I met David Jolly, a horn player of the Newport Classical Music Festival. It was an interesting time, and I started studying with him. I went for my Masters at the Manhattan School of Music for the horn. I played in lots of different venues and circumstances. The horn eventually became more a more prominent part of my life. Music became a calling, taking me over. I built my career studying and slowly getting more paid work in New York City, and moved to Israel. I was married to a musician in the Israel Philharmonic. I auditioned for the opera orchestra in Tel Aviv and got the job.

We toured together. It was a great time for me– touring the world. I later played with most of the orchestras in Tel Aviv and lived there four years.

That’s when I started to learn Flamenco as a diversion. In Tel Aviv, there were five Flamenco studios. The roots of the dance are Moorish, Jewish, Gypsy, and Indian. It’s a cultural blend. In Israel there is a cultural link, particularly with the intensity of the art. I took classes there and had a great teacher who taught me castanets. I had always been interested in Flamenco performers like Paco De Lucia. My mother’s mother is from Spain and my Mom’s dad is from Peru, so I have that background. I used to pretend to be a Flamcenco dancer as a kid.

I: What composers do you hold especially dear to your heart?

EC: My tastes are rooted in Flamenco. Paco De Lucia was a major influence. The documentary Light & Shade shows what happened to him and how he became the greatest Flamenco guitarist. He was forced to practice ten hours per day by his father, and was the bread winner for his family. He had flawless technique, facility, and there is this relaxation that happens when he plays. It is very special. I try to take that into my performance as a horn player. Tensing up is a problem when playing any instrument. Relaxing is key to great performance. He was a great inspiration for me, watching him play.

For classical composers, I love experiencing Mahler’s symphony live as an audience member. The big orchestra pieces are very visceral for me. I enjoy playing them too. I enjoy clear, clean Mozart– like his string pieces. I love to hear that kind of performance.

For contemporary, for the Palm Beach Chamber Music Festival we are playing a piece that has never been recorded by John Addison, an English composer. I am excited about this piece. I love John Williams too. The element of fun with a new piece with no reference point. It is an enjoyable experience, enjoying the use of color, their influences from their time. I like the process of doing lesser known work or a new piece and hearing where it came from.

The Palm Beach Chamber Music Festival. I also play in as a sub in several Broadway Productions, like the Lion King and Frozen.

I’m going to be dancing in March of 2019 with the Atlantic Classical Orchestra in South Florida– in Palm Beach Gardens, Stuart, and the Boca Symphonia for Sunday Concerts at the St. Andrew’s School.

I am also doing my own choreography for Flamenco. The evolution of it was an interesting process. After the fact, observing it, I realized my influences. The connection is very interesting. While I love playing for the ballet and seeing these pieces, I learn a little about classical training as a dancer versus more modern approaches to choreography. People like Martha Graham are doing their own thinking.

The thing about Flamnceo that has always kept my interest is that I love the tradition of it. There is plenty of fusion, now but I respect the experimental side of it. It may draw in audiences that you might not otherwise get.

New technologies like smartphone video help us capture more, but it also hurts the tradition.

When I stayed in Granada, it was a great experience. Lorca felt at the time that Flamenco was not respected enough, and Manuel de Falla, started a competition for singing at the Alhambra that still exists. I love the age and historicity of flamenco and how it can be molded to accept other influences. My teacher was a very traditional teacher– Jose Molina of the Jose Greco company in New York City.

My family and my husband are supportive of my career, because of the demands of travel. Flamenco’s tradition of oral and verbal transference of the tradition is very special.

I: If you could perform in one symphony hall which would it be?

EC: My favorite was the Musikverein in Vienna. I have not yet played in the Sydney Opera House, and I would love to play there. I did play in La Scala and Carnegie Hall and was blessed with those experiences. The Philadelphia Orchestra Hall is also lovely.